As UGC evolves from video-driven experiences to voice, what tools are needed?

One of my favorite themes to invest in over the last 15 years has been Vertical User Generated Content. In a world before ubiquitous wifi, streaming video, or creator tools, text-based user generated content emerged as the top of funnel for marketplaces of fragmented, offline supply (UGC 1.0). Video ushered in another era (UGC 2.0) and we are in the early innings of seeing voice-driven experiences catalyzing the growth of new social and consumer businesses (UGC 3.0)

As I spend more time on voice-driven platforms, I can’t help but wonder how will the next wave of UGC opportunities look different? Can voice impact the ‘path to purchase’ in e-commerce? When and how does the market tip? And what infrastructure is needed to get there?

The Case of Viator

To better test and evolve my own frameworks, I look to the past.

As an example, consider TripAdvisor (FY19A: $1.5Bn of revenue, $437M EBITDA), or Viator — foundational internet businesses emerging from the first wave of UGC in travel as a vertical.

While lesser known to most, Viator quietly scaled to serve +1.5M customers across +1000 destinations with +220 employees on less than $30M of total preference raised during a 15 year run. Quite the run!

So what made that efficiency and reach possible for a startup founded in Australia 25 years ago?

Looking back, text-based UGC was often ‘productized’ via unique, high-fidelity user reviews (ie. Yelp). In the case of Viator, the business amassed +600,000 verified reviews by travelers that in turn drove +10M monthly visitors; visitors who came to the platform for discovering, and ultimately booking local activities.

Conversion was driven by a mix of economic incentives once on platform (a low-price guarantee), differentiated convenience (a 24/7 multilingual call center), real-time availability (~75% of their inventory bookable within 24 hrs), supreme service, and proprietary expert destination content placed alongside their ‘closed loop’ user generated postings. The team deftly reinvested their UGC assets into a number of local language sites, growing to serve other international markets and +2,000 travel affiliates (airlines, hotels, loyalty platforms etc).

But how does any of this relate to voice?

On the surface, ‘what good looks like’ for Viator’s supply side was simple: deliver bookings volume to their partners and provide them with online tools including an overarching connectivity platform. However, what’s less discussed (and less simple) is what it takes to recruit your initial supply. Your first believers.

For Viator, that meant building a platform for local operators which included:

Which brings me to Voice. Today, we find ourselves in the early stages of a new wave of voice-centric applications; and, if history rhymes, I’d bet that a form of supplier APIs emerge to unlock the market.These will be multi-modal and initially delivered B2B2C. A good example is Speechly:

While I am not an investor in Speechly, I recognize that Supply APIs have been core to each wave of UGC’s foundational businesses. And as history suggests, I believe that will hold true for the next. So if you’re a developer working with voice APIs let’s chat.

It’s about time…my fingers are tired from the last 20 years!

Posted on September 10, 2020 by Marco DeMeireles

“A generation left behind?”

The Equity Gap in Pediatric Healthcare

It’s clear we must do better.

Now picture a family of four, one that needs to make ~$35K a year or less to qualify for Medicaid (138% of the federal poverty level). Families struggling to maintain their income at these levels often can’t find the time during the workday to take their kids in to see a pediatrician or pay for supplementary on-call services.  And they most often don’t have insurance that extends effective telemedicine solutions to their kids.  So, they wait until a time of concern, and resort to taking them to their local 24-hour ER or urgent care facility.

Studies show that Medicaid patients are over 50% more likely than people with commercial health insurance to use the ER as their primary place for care. Yet, one of the biggest drivers of avoidable pediatric Medicaid costs is overutilization of the ER for non-emergency situations.

For years we’ve known that having the ER as a pediatric care provider for low-income families is not cost-effective.  But what alternatives do they have?

There have been several attempts to fix the ER problem over the years.  I wont go into all of them, but telemedicine done right (i.e. purpose built, with features designed for this cohort) has clear potential if aligned with outcomes.

Unfortunately, today, the pediatric needs of the Medicaid population have been largely left behind. Access to technology is just one of the hurdles this group faces. Historically, telemedicine products have been offered through employers as a benefit for employees. This poses a problem for families on Medicaid for two obvious reasons:

First, it’s traditionally been higher-end plans that properly cover and communicate telemedicine benefits, though that’s changing. And second, both the product and software workflows are designed for doctors to talk to adults!

As you can imagine, the challenge of pediatrics is that the patients are often very young children. It’s much harder for a doctor to get the information they need to diagnose conditions from them than it is for adult patients.

Thus most vendors and plans have not made pediatric telemedicine a priority because they perceive utilization to be low.

But in reality it may have been just the wrong product. Until now?

As an example, consider Blueberry Pediatrics — a pediatric-focused telemedicine offering that gives parents affordable, quality care instantly via text, phone, or video any hour of the day. Blueberry removes all friction to getting care — there are no appointments, no waiting, and no gatekeepers — at just $15/month. 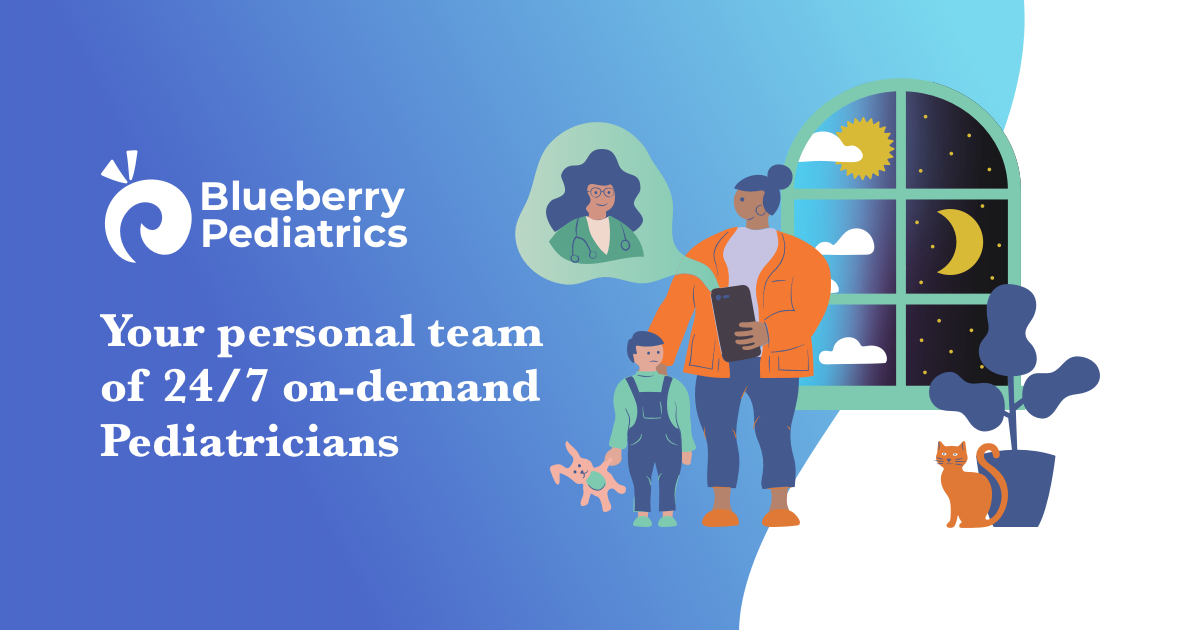 Any form factor, at any hour is deceptively powerful; it threads the needle on broadband issues and computer access concerns that the LA Times cites. And the Company goes one step further by providing an at-home medical testing kit: parents use the kit to collect their child’s vitals (heart rate, oxygen levels, temperature) and perform ear/nose/throat examinations without leaving home. This means Blueberry can handle cases other telemedicine services can’t, like ear infections, RSV, and croup. It is a powerful wedge, and life-stage to build around.

The best products lead with simplicity. Providing care via text creates significant advantages for the consumer experience as well as the business itself.  For example, text messaging also enables physicians to be in constant contact with families and manage symptoms as they progress instead of only getting a single 15-minute snapshot in a video session.

From what I’ve seen, this is a great step in the right direction, but the world desperately needs more folks like Harrison Gordon and the team at Blueberry building intentional solutions for those in need.

I am not an investor in Blueberry, but I am grateful to my old colleague Adi Sivaraman for introducing me to the team and problem they are solving.  I’ve always believed the best hires teach you, and I was fortunate to hire Adi as an associate years ago; to have him push my thinking on all things healthcare years later is unbelievably rewarding.

We owe it to each other to try and leave no one behind. If your mission is to use technology to better care for a massive, undeserved, segment of the population — get in touch.

Venture capital has a clear role to play and I’d love to help.